From hyperrealism to the reality – Lo Chan Peng Solo Exhibition 2020

“Truth strikes us from behind and in the dark, as well as from before and in broad daylight.” -Henry David Thoreau

Lo Chan Peng made his debut in 2007 with the Strawberry Generation series which depict people around him as the subjects of the paintings. Since then his name has been closely linked to photorealism or hyperrealism. The hyperrealism movement was officially revealed in the fifth edition of Kassel Documenta in 1972, fifty years later, with the constantly improving and innovating technologies and the necessity of photography in the modern age, the movement is at its most popular, for it’s now considered as one of the best methods to discuss what is “real”. Since all the paintings originate from photography, it doesn’t mean Lo merely paints what he sees, whilst his extraordinary techniques do not simply reproduce what is visible, but are better associated with Malcom Morley’s so called “illusional anatomy” or the “absolutism of the media” as suggested by Andy Warhol. Photography is the indispensable route for these kinds of paintings, for they provide the means to view and the conditions to feel, whilst what is “real” being the true subject. Due to the fact that the artists paint in the manner of photography, hence what they present to the spectators is not always real, but the “hyperreal” as claimed by Jean Baudrillard. This explains the artists’ deliberate withdraw from what is real because the images have become the barrier between the artists and the reality, and they are confined to present “the reproduction of the reproduction of the reality”.

The fluorescence in his Strawberry Generation is just a disguise which appears to be perfect and fragile and would eventually be conquered by The Edge of Darkness. Yet his faith in Portraiture remains. People are Lo Chan Peng’s main subjects. As long as he needs people, he is constantly in demand of photographing people or searching for images of men for the familiar connection between the artist and his subjects. In contrast to photography, painting has offered an aesthetic approach which not only changed the way photography functioned but also emphasised on the artists’ enthusiasm in the selection of the oldest artistic medium. Lo Chan Peng applies glazing, a technique established at the beginning of the invention of oil paint in the fifteenth century, to alter his images and explore means of escape. He devotes himself in the time-consuming mixture of oil and paint, the laboured layering of thin transparent and opaque medium. Through this “organic” technique which relies heavily on temperature and humidity, he finds the umbilical cord which connects now and then. Living in between the struggles between the artist and painting materials, he eventually perceives the fabricated images as the reality of the artist’s existence.

Lo Chan Peng applies the glazing technique on his 2020 Portraiture series. The canvases are almost hyperrealistic, with metaphoric and metonymic details, the dramatic compositions respond to the disciplined forms. At close up, these paintings lack the flawless appearance – the broad brushworks blind the sitters’ eyes, blemish their cheeks whilst unclarified grains and splashes of paint are liberally applied to the canvas or scraped on the edges to create an uneven surface. Apart from the traditional glazing technique, Lo works with unusual methods such as scraping, engraving, covering up and layering, for the “damaging” of the surface create incredibly dramatic conflict between illusion and reality. From form to shapelessness, perfection to sabotage, order to chaos, structure to collapse, two-dimensional to three-dimensional, reproduction to presentation, and the reality of reproduction to the realisation of the material!

Children of Syria borrows pictures from photojournalism to display Lo’s concerns for the victims. The still images contain a strong sense of narrative, yet no conclusions are provided. The series display the ridiculous and miserable conditions men live in, and how the artist’s empathy for those sufferers is reflected on his works. He said it has been finished is a metaphoric representation of the Passion of Christ and the path to redemption he had carved out. The Historical Figures series focus on the “history changers”, through the mechanical reproduction of well-known portraits, Lo’s paintings highlight the time differences between photographs taken in the past and the canvases that are being painted today. Through studying subjects of this this kind, Lo Chan Peng works on the balance between sentimental imagination and sensible observation, painting aesthetics and the impact of the society.

During Lo Chan Peng’s unvoluntary seven-year sabbatical, the solitude helped him build up a tough appearance, yet he still had to face some of the most challenging events in life, from which he made major discoveries. His mind sublimed whilst his paintings solidified, as seen in the monumental Lumière paintings and A Brief History of Time. The miniature hyperrealistic sculptures above the paintings purify the compositions by relocating the figures from painted forms to three-dimensional sculptures. Lumière depicts the shadows casted by time, whilst the sculptures bear the mystery of life and death. The two panels of A Brief History of Time transform themselves into two giant stelae, standing there in silence and enduring the weight of art history and history, and allowing the artist to carve on the impressions of each dynasty to strap the past and future of the humankind together. Lo Chan Peng gradually detaches himself from the shallow appearances in order to seek for the mind-blowing truth and reality under the deceiving surface. 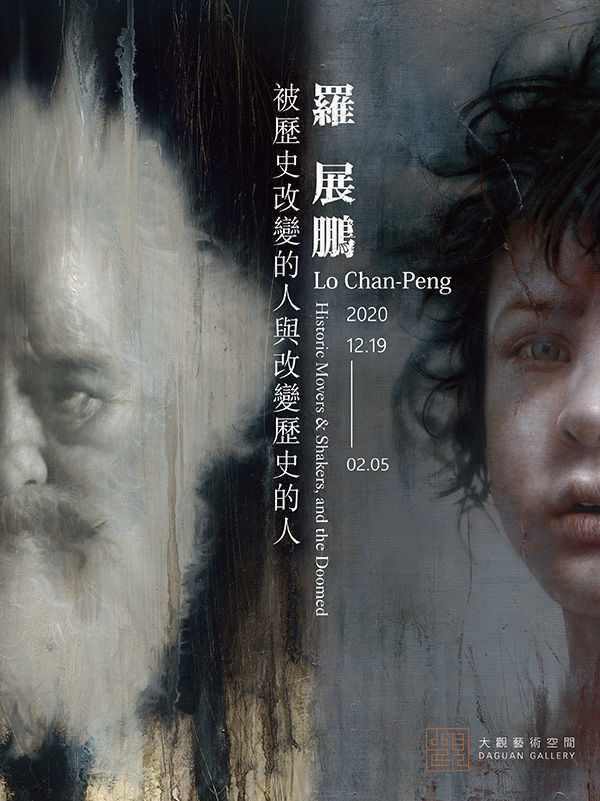